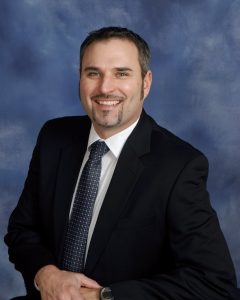 Pastor Baldwin was born and raised in Michigan’s Thumb.  He grew up in Silverwood, which is near Mayville, where his parents still live. He attended Michigan Lutheran Seminary in Saginaw for high school, which prepared him to continue training for the ministry in college. At Northwestern College in Watertown, Wisconsin, he received a liberal arts degree with a concentration in the ancient biblical languages.  His studies focused on developing skills that would allow him to read and work in Hebrew and Greek languages, the original languages in which the Bible was written.

He continued his preparation for the ministry at Wisconsin Lutheran Seminary in Mequon, Wisconsin.  He spent three years there in the class room working in various areas of biblical, pastoral and theological studies.  He also spent an additional two years training as a vicar under a pastor in a congregation, which is similar to an internship.  He first vicared at Baraboo, Wisconsin and spent another year at a congregation of the Evangelical Lutheran Synod of Australia (ELSA) in Horsham, Victoria, Australia.

After graduating from Wisconsin Lutheran Seminary in 2000 with a master of divinity degree, he was assigned to serve a dual parish in South Dakota, shepherding congregations in Huron and Willow Lake.  He served there until receiving a divine call to St. Charles, where he began serving as Hope’s pastor in September 2001.

In 1998, Jason married the love of his life, his wife Jodie.  They have been blessed with three wonderful children, Tyler, Ellie and Hannah.  The kids are a great joy to them.  Jodie enjoys being a homemaker and is active in various aspects of the congregation.

Pastor Baldwin and his family would love to get to know you better.  If you have any questions about Hope, you may contact Pastor at any time.  You can call him at the church office at 989-865-9875, his home at 989-865-8087, or email him at pastor@hopelutheranstcharles.org.